Today was Katie’s big event of the year, the Mud Ninja Extreme Challenge. Hosted on a horse farm outside of South Salem, Ohio, it’s no stretch to call it Ohio’s premier mud race. While the race distance won’t impress any Tough Mudders, the obstacles will. Packed into just over 3 miles were 25 obstacles, ranging from pretty hard to “you want me to do what?!”

We did the Mud Ninja for the first time last year on a whim, and Katie signed us up for it. While we did very well for our first try, we left a bit on the table to conquer this year. In 2012, Katie wasn’t able to attempt some of the obstacles at all, having turned her ankle pretty seriously before the end, and I fell off/didn’t complete a few, myself.

But this year would be different. We’ve both been training hard, we’re both lighter and stronger, and more confident in our abilities. Even the fact that the day dawned cool and rainy didn’t phase us much, as we drove into the middle of nowhere, and then 15 minutes further to reach the event.

The rain had made the whole course a slick, sticky, muddy mess, even more so than usual. And the new obstacles looked serious, like an American Ninja Warrior inspired, springboard-equipped leap for a vertical cargo net. It was hard, all of it. Harder than last year, both because of the new obstacles and because of the rain slicking everything up. There were people quitting in several places, and lots of people giving up on every obstacle, but not my Katie. And not me.

We slipped and slid and climbed and scampered and pulled our way through the whole way, thorn bushes, sharp rocks and rope burns be damned. And we did it, did it better than last year, and stronger than even we had hoped. For my part, I only fell off of one obstacle, and completed 3 that I remember failing on last year. I was blown away at how strong I felt, and how I was able to command strength and confidence in ways I was unable during our last attempt. Both of us are stronger and lighter than we were last year, but our performances at the Mud Ninja demonstrated just how much stronger and lighter, in undeniable terms. We will most definitely be back next year! 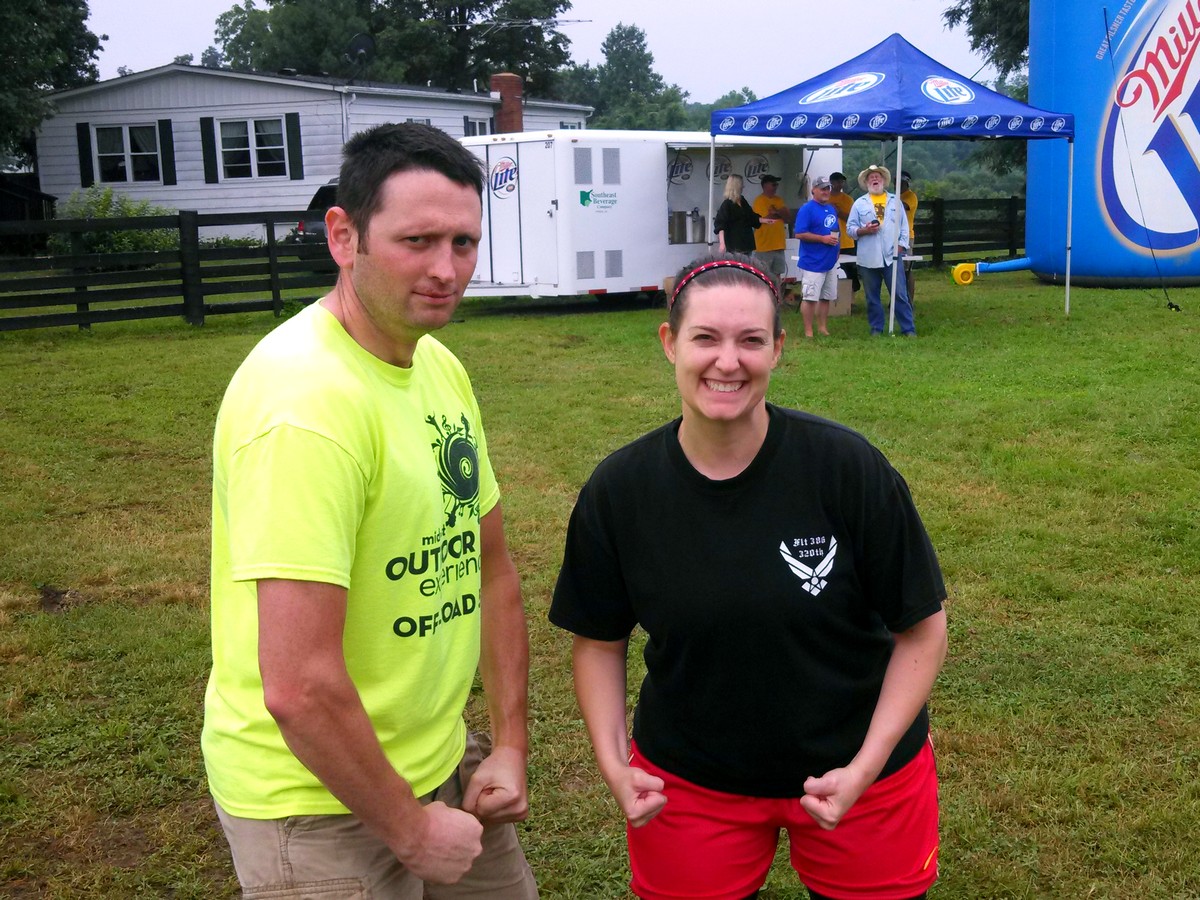 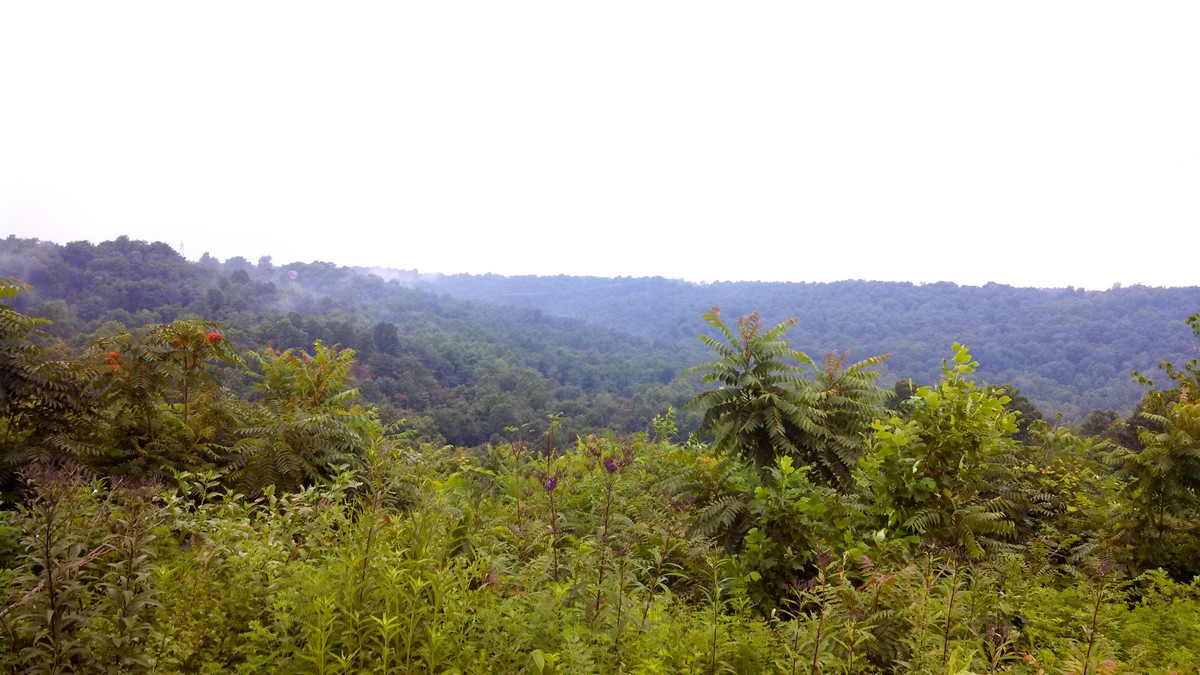 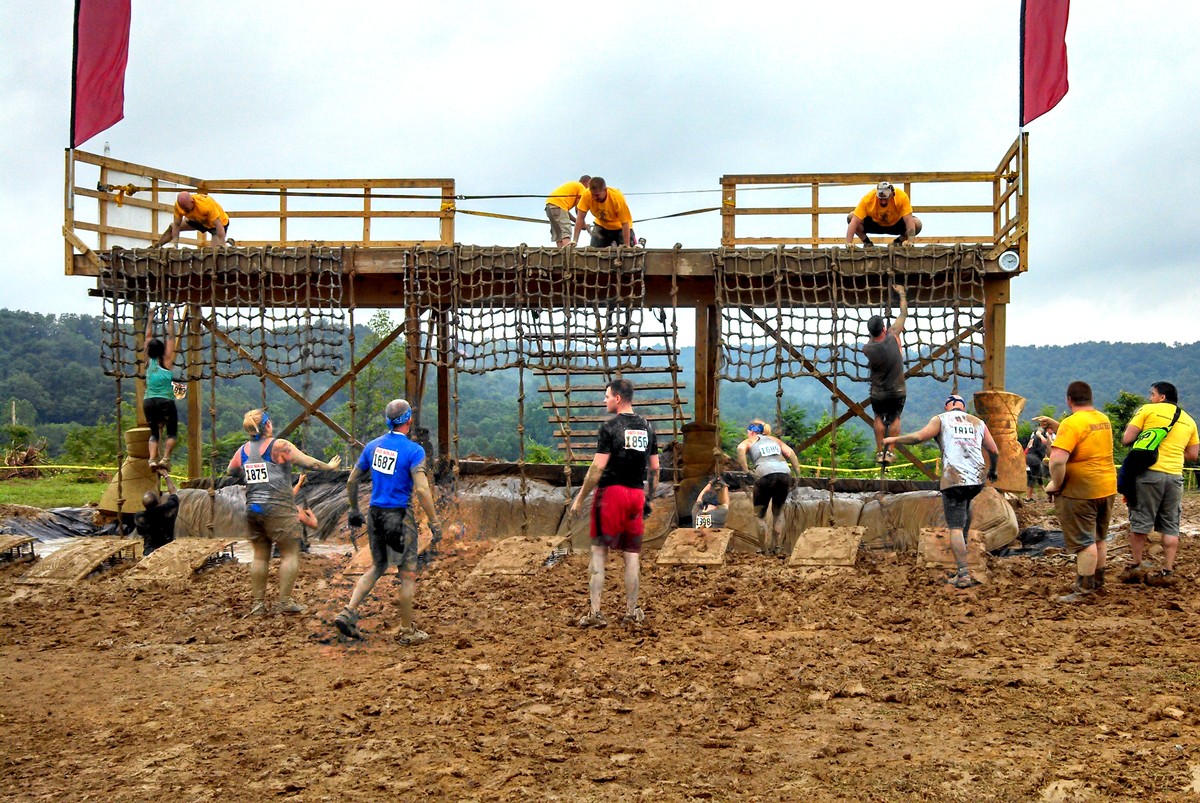 One of the early obstacles, American Ninja Warrior. I was one of a very small percentage of entrants who cleared it, unassisted! 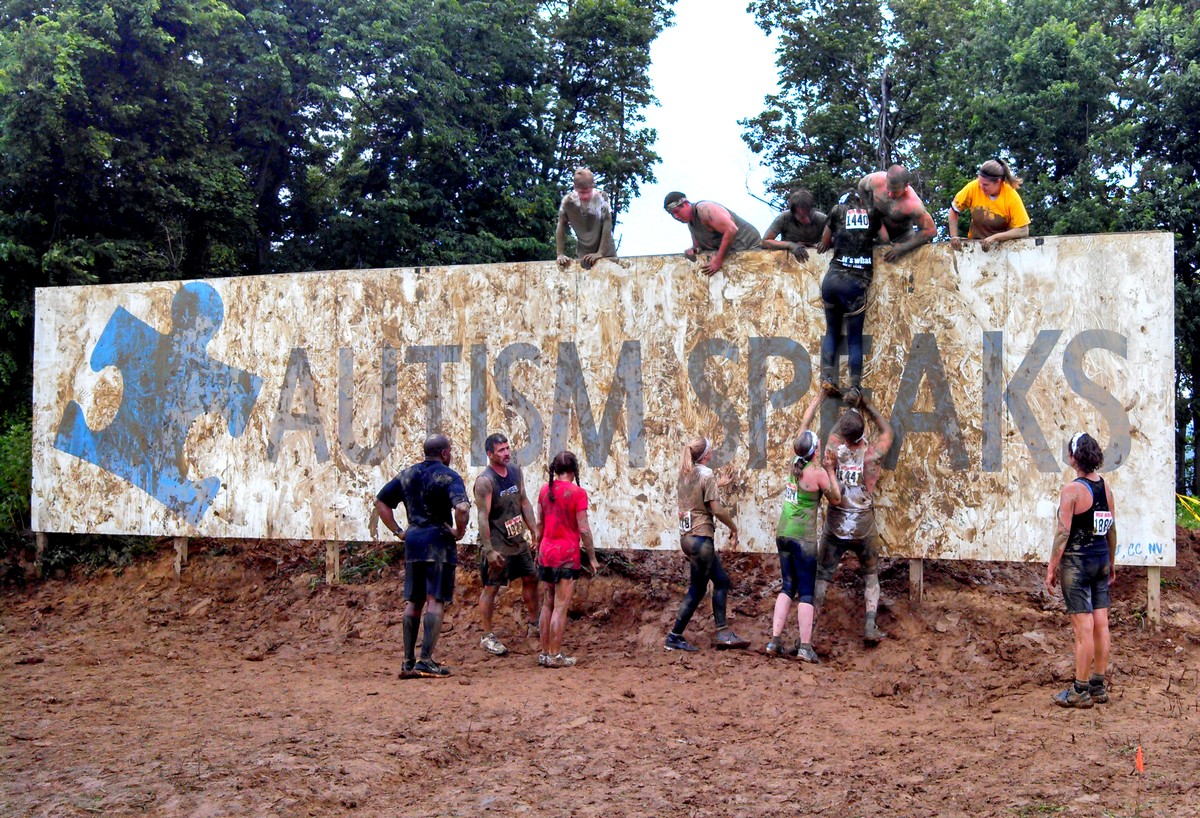 The wall. You aren’t getting over without help. There’s a lesson there, about life in general. 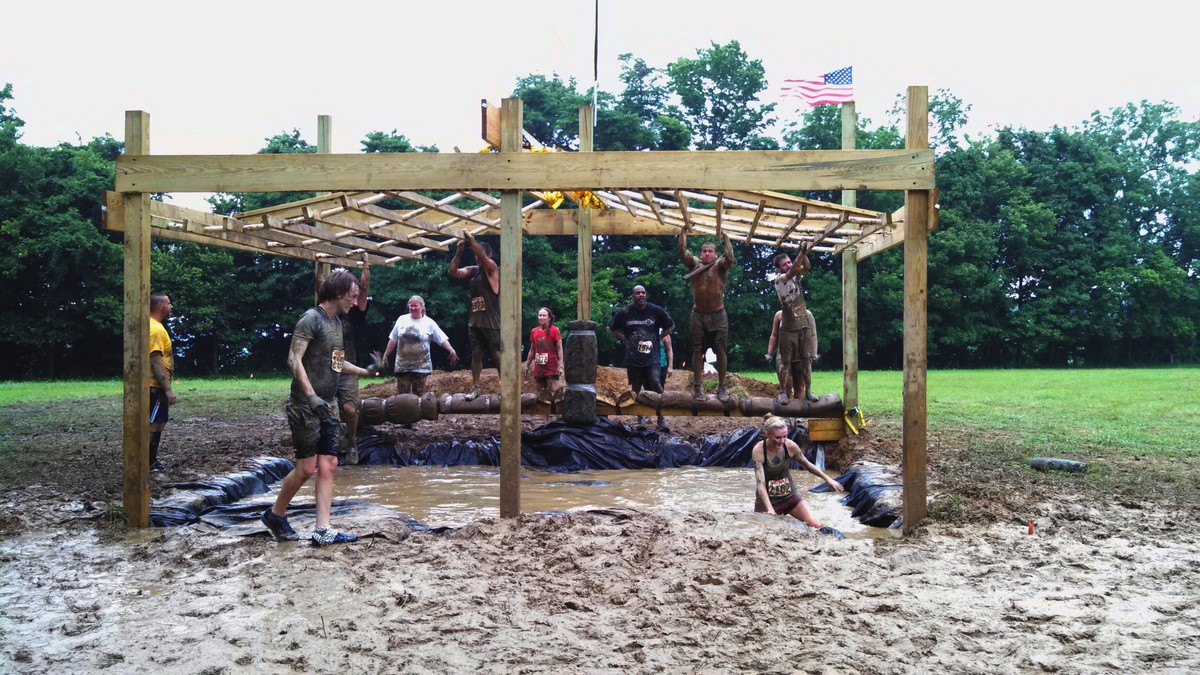 Not many people cleared this one either, but I did. Make your hands into inflexible hooks and swing side to side, and you can make it! 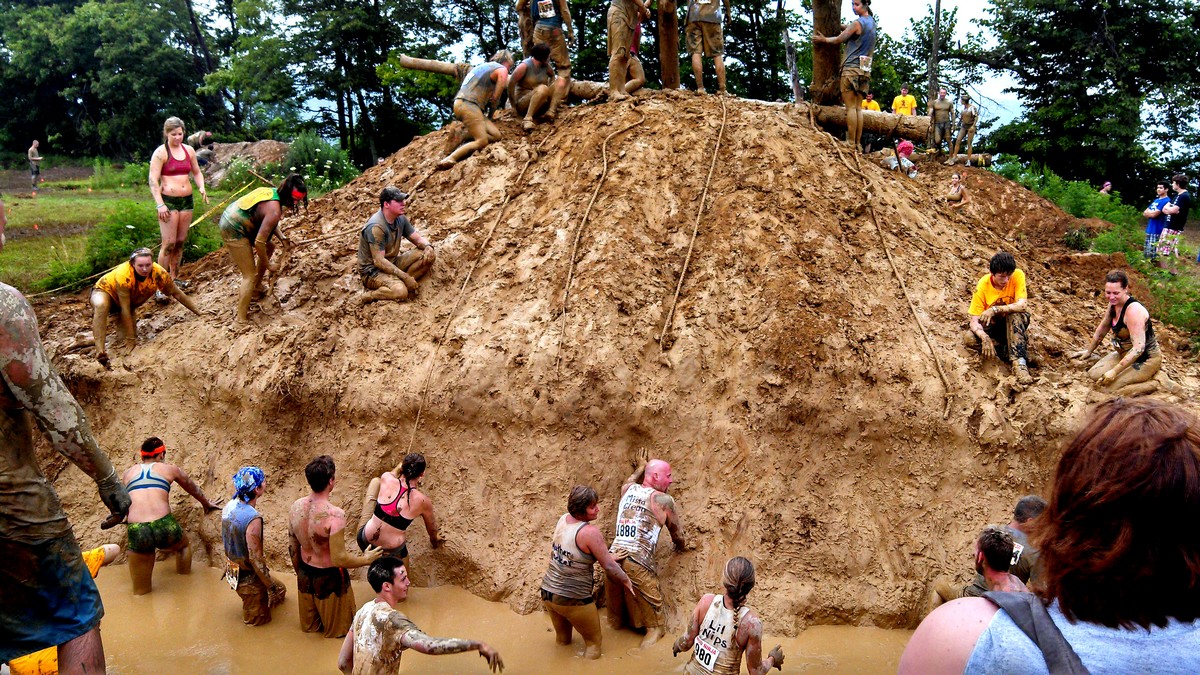 Slide into a muddy trench, then scamper up the hill, using those ropes. Easy enough, right? And then your reward is…

Dangling by your hands from this rope across the gap. You could rest, sort of, on the slack lines. But you had to reach them first. A real test of grip strength… 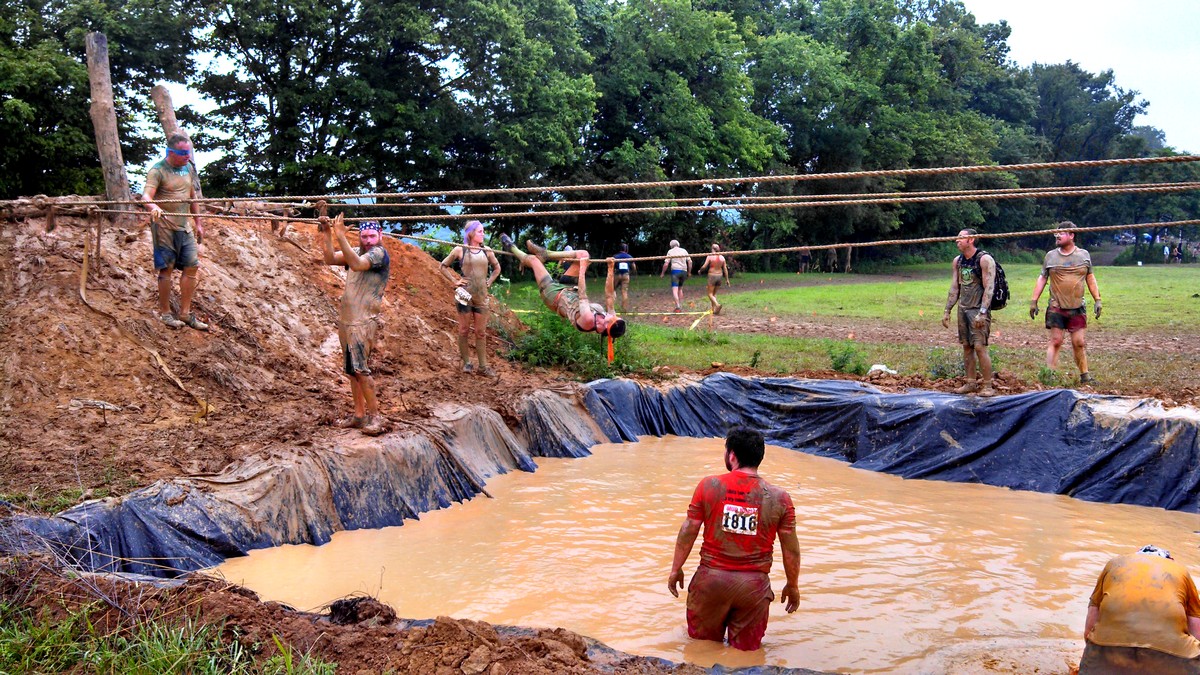 Followed immediately by another. This time you got to use your feet, but the gap was wider, and had no breaks. This was a test of not only grip strength, but concentration and endurance. I failed on this obstacle last year, and nearly clocked my head on the ledge at the far end. This year, no such trouble. 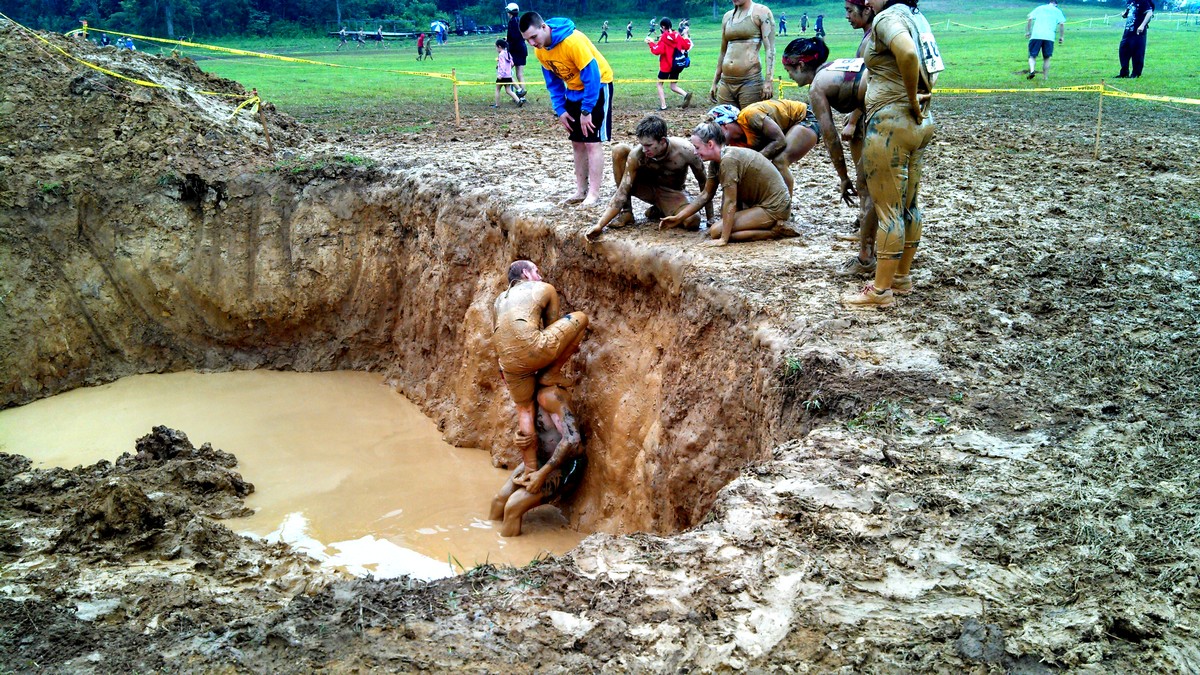 But even if you made it across the gap, you weren’t making it out of this by your lonesome.

More slacklines. A few tried to just walk across. They failed. 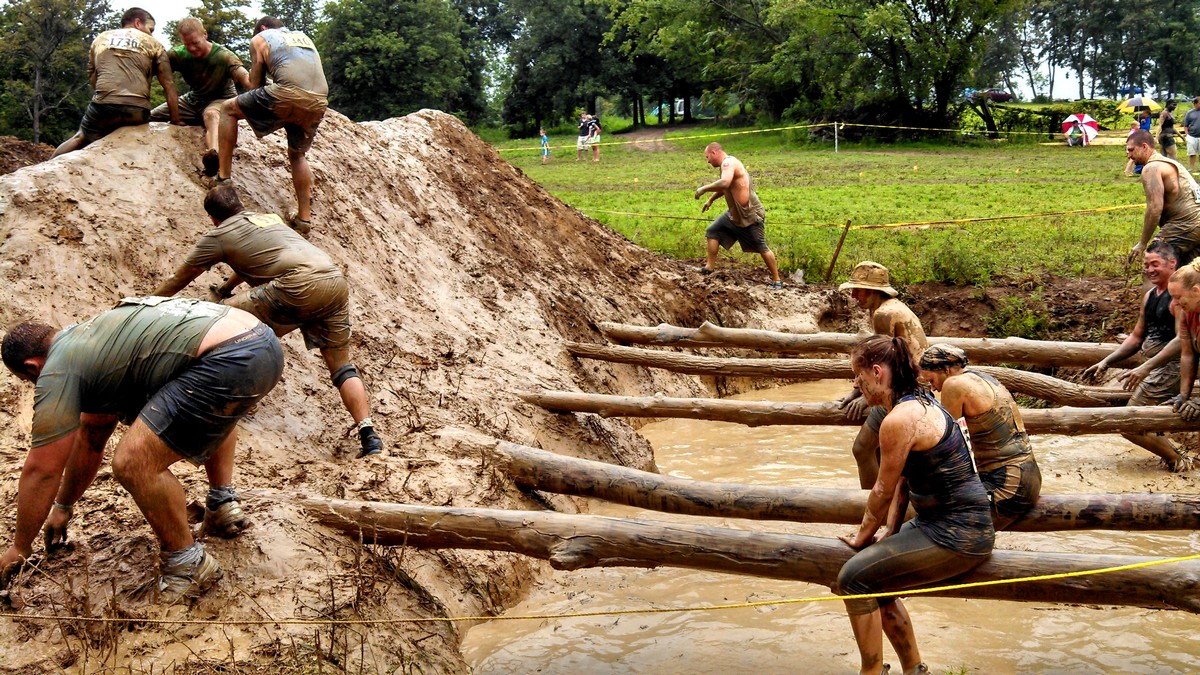 Harder than it looks, given how slick they were, and some uncomfortably placed knots. 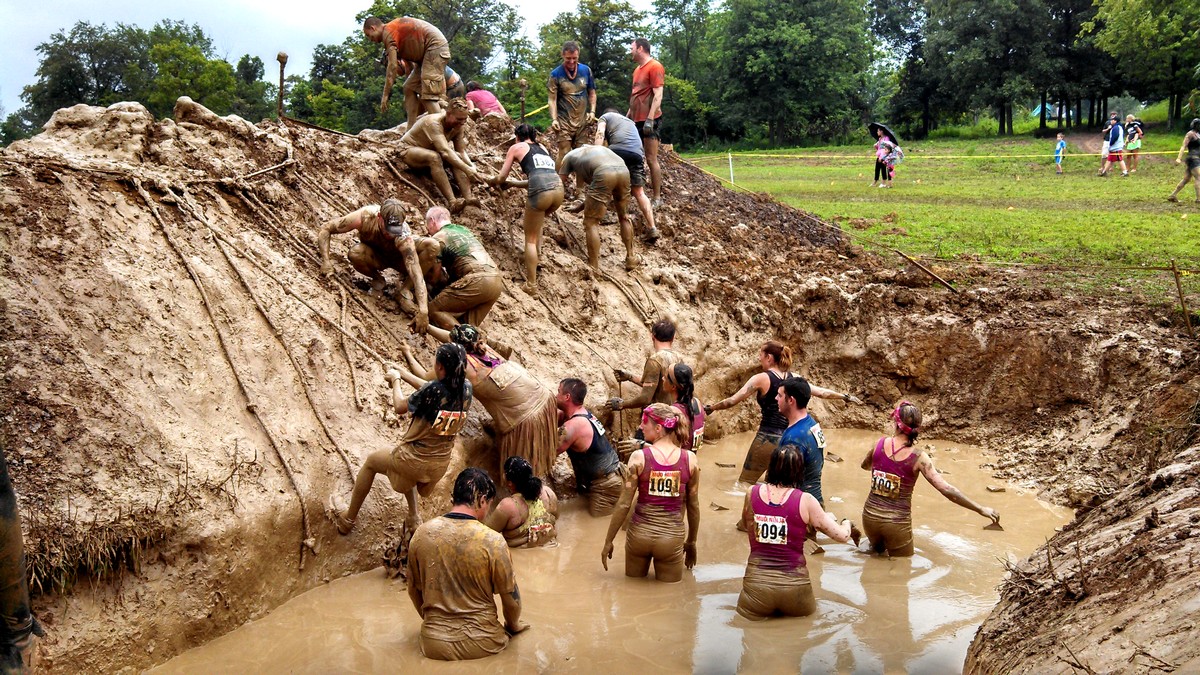 The final few obstacles were like this. At that point you’re so exhausted you don’t even think. You just grab something and pull, and struggle, and slip back into the water, and keep trying until you make it. 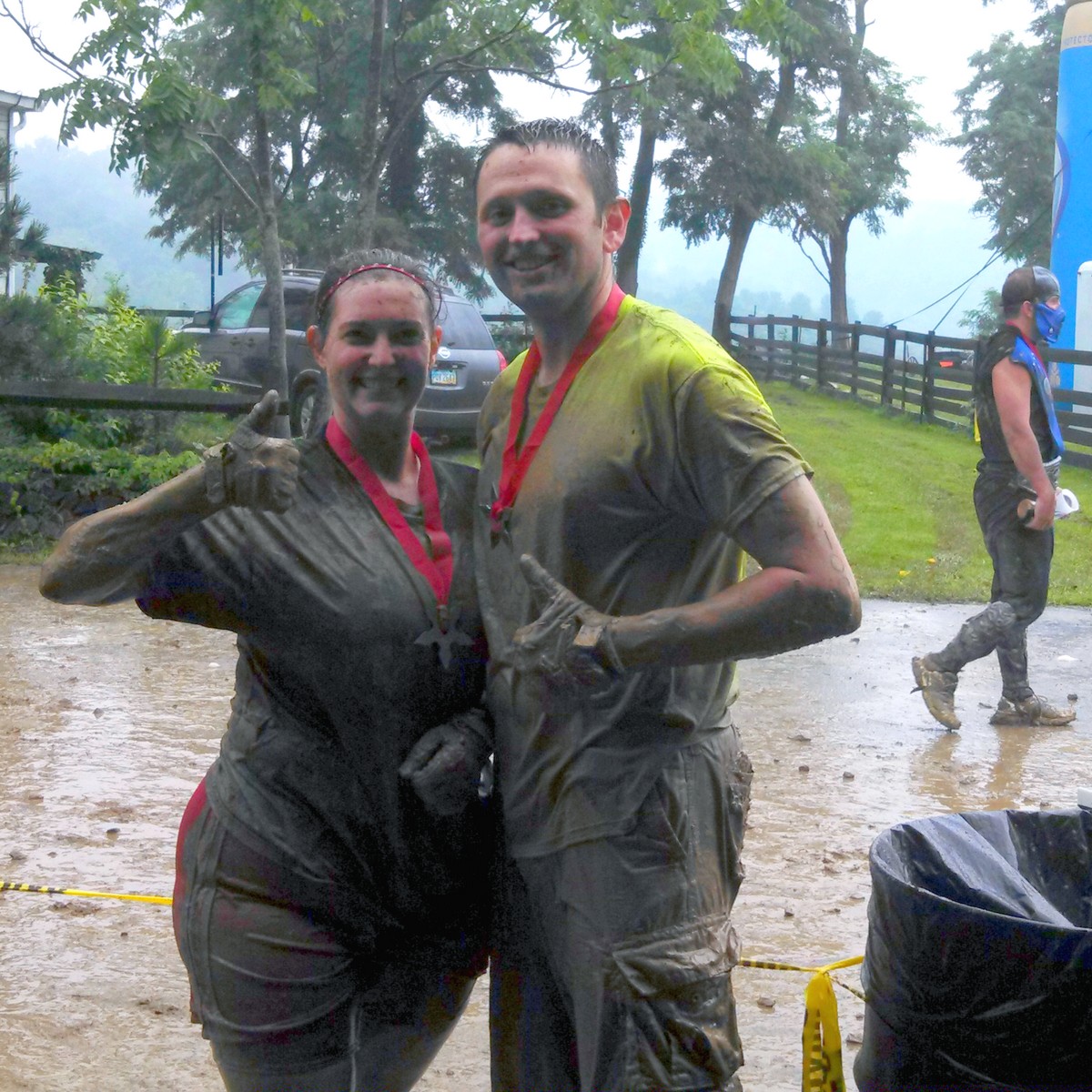 Feeling proud of ourselves. Wait, is that THE Mud Ninja in the background?! 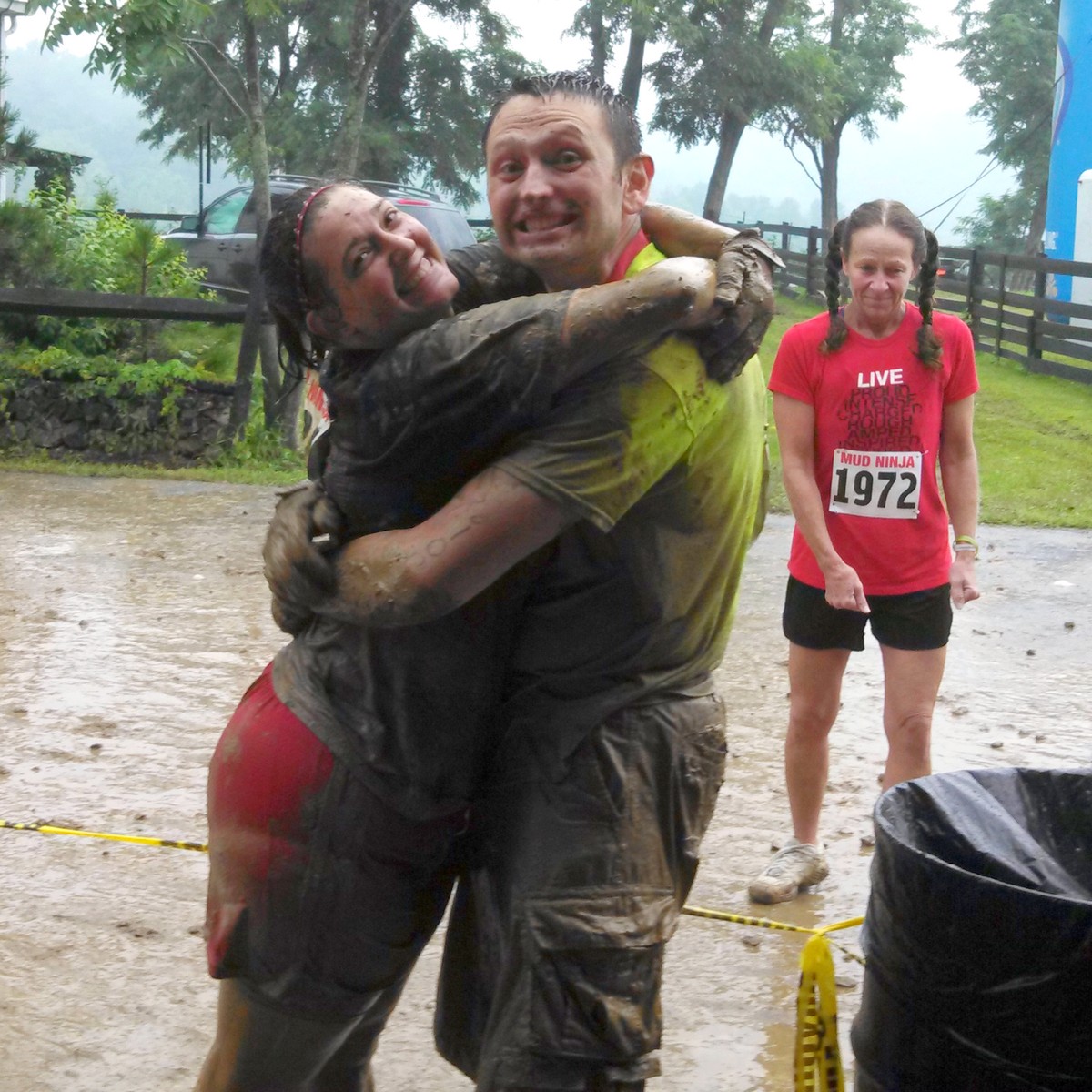 The happy, muddy couple. This would be a heck of a venue for a wedding, come to think of it! 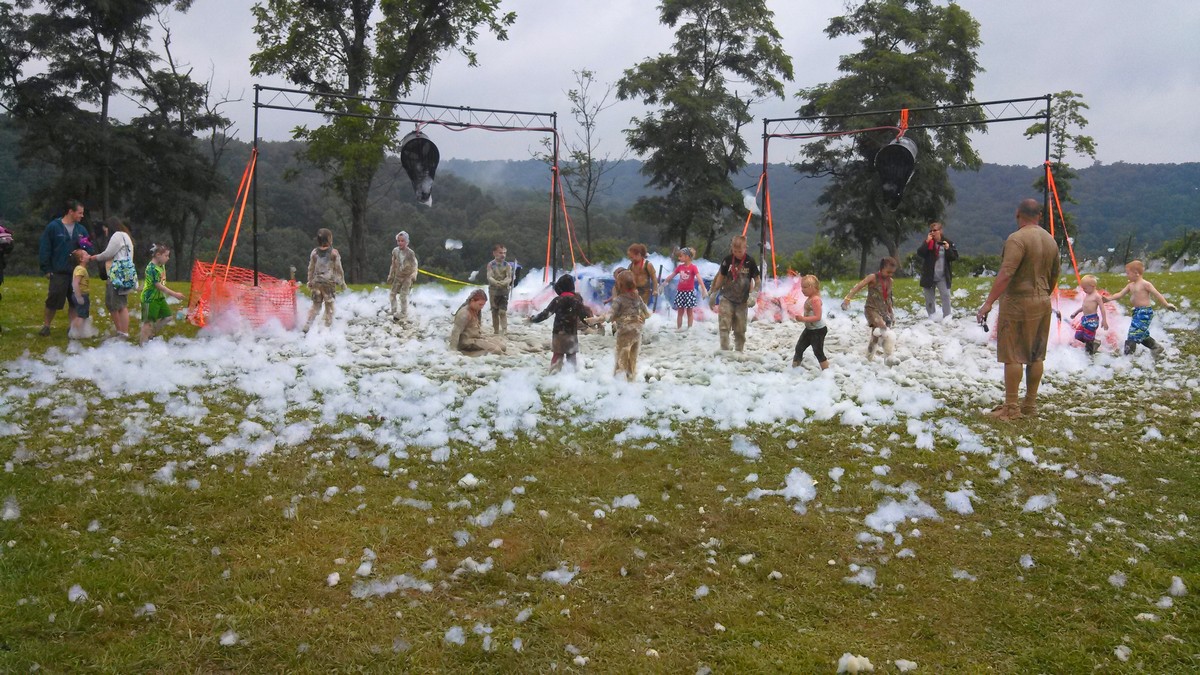 A foam party for the kiddos, who also had their very own course! 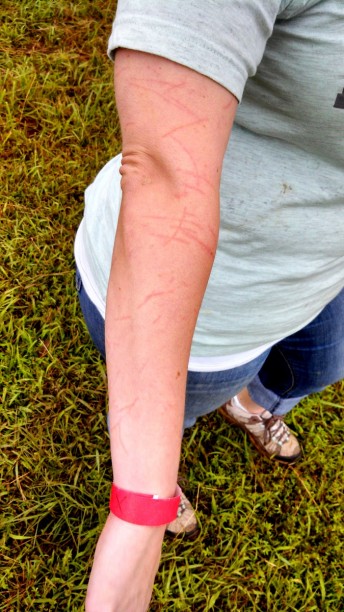 The consequences of using thorn bushes for handholds. Worth it! 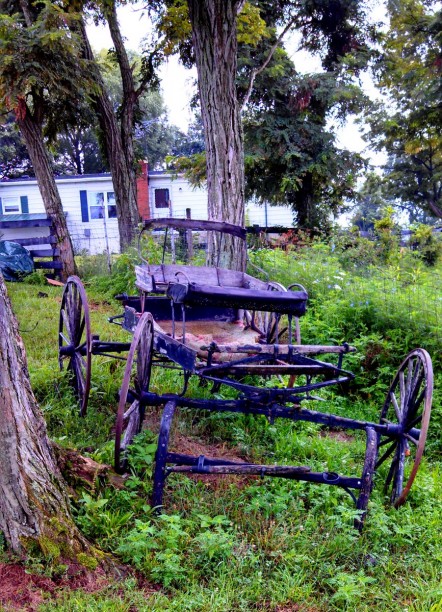